Get fresh music recommendations delivered to your inbox every Friday.
We've updated our Terms of Use. You can review the changes here.

by Musicians of the Institut National des Arts in Bamako, Mali 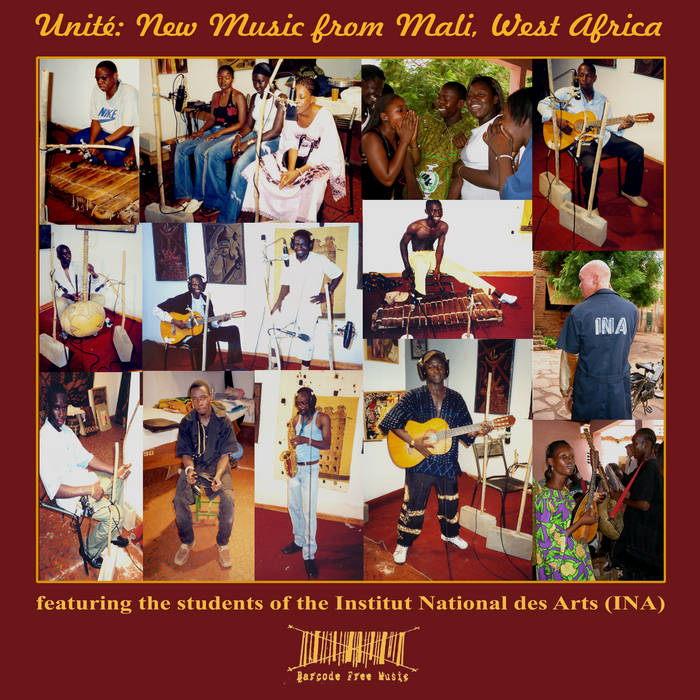 The National Institute for the Arts (INA) is the Malian equivalent of Canada’s Banff School of Fine Arts. Only 30 students are admitted each year from among the several thousand applicants who want to study music, dance, painting, sculpture, and other fine arts. While it is the only arts college in Mali, there were, at the time this recording was made, no facilities or equipment for recording music available to students.

When it was confirmed that I would be travelling to Mali with some portable recording equipment, a unique opportunity presented itself. In May of 2004, at the invitation of the Minister of Culture M. Al Hady Koita, and Institute Director M. Oumar Kamara, I spent a week recording senior students in the Music Program at the INA.

This project was part of a larger initiative to undertake a multidisciplinary cultural exchange between Canadian and Malian artists.

The primary objective of the INA is to make it possible for musicians to hear recorded versions of their songs for the first time, principally as a learning tool. It was also hoped that the recordings could be used to demonstrate the talent of the students studying music at the INA and to promote future exchanges between Canadian and Malian artists, part of a larger set of community music exchanges that have played such a key role in promoting other forms of cultural sharing, exchange, and inspiration.
Thirteen of the school’s singers, songwriters, and instrumentalists were selected by Music Director, Souleymans Dembélé, to record both their own compositions and various traditional Malian songs.

Recording took place randomly between breaks for prayers, power outages, official gatherings for visiting dignitaries, and exams. The singers were accompanied by an assortment of Malian acoustic stringed and percussion instruments (kora, n’goni, balafon, djembe, karagnan) and the ubiquitous acoustic guitar played in the unique two-finger style typical of Mandingue and Malinke guitarists.

Microphones were suspended from tree branches and jury-rigged stands in open spaces with local soundscapes fully a part of the ambience of this recording.

The biggest challenges to making the recording were technical and included dealing with variable and unpredictable electrical current, excessive heat, transportation to and from the INA, and finding a suitable space with the least amount of background noise (no mean feat, given that the INA is situated in the middle of Le Grand Marché next to the central Mosque in Bamako). A gallery displaying student work in a room that bordered on a busy market street became an impromptu recording studio––without soundproofing or air conditioning. The schedule was tight, and interruptions were many so that at times I wondered how the sessions would ever get done. Time was never wasted, though, and breaks in recording became spontaneous jam sessions, music lessons, and discussions. Somehow, miraculously, we finished, and in the end, it was the support of the faculty, and the enthusiasm and talent of the musicians themselves that made it all possible.

What you hear on the recording, in most cases, is the result of a single take.

Though these songs were recorded under difficult circumstances as a form of witnessing the exceptional talent and musical brilliance of younger Malian musicians I believe the music recorded here reflects not only Mali’s rich musical heritage but its future––a future worth listening to.

Web Design: Northern Village (2021). With sincere thanks to Bay Weyman for permission to use the clip from his film Road to Baleya: Music Has No Borders.

Mixed and mastered in Guelph, Ontario, Canada by Lewis Melville in 2004.

Barcode Free Music promotes alternative forms of musical cocreation that are community-based and socially engaged––bringing these projects to a wider audience. We are a not-for-profit collective.

Bandcamp Daily  your guide to the world of Bandcamp